Mary Ellen left her first two children, Annie and James, with her parents John and Martha Abbott, their grandparents, in Farnworth when she moved to Newcastle Upon Tyne in Northumberland some time after 1881, exact date unknown. What she did between 1881 and 1886 is still a mystery.

The first record of Mary Ellen in Newcastle is her marriage to Bentley Henderson on June 29th 1886. They were married at Christchurch parish church, Shieldfield, Newcastle Upon Tyne. Mary Ellen was 27 years old, Bentley 23 years old. On the marriage certificate John Abbott, watchmaker, was noted as Mary Ellen’s father and  Elias Henderson, boilermaker as Bentley’s father. The witnesses were James and Mary Atherton. At the time of Mary Ellen’s marriage in 1886, daughter Annie was seven years old and son James barely five.

Norma McNab, great granddaughter of Mary Ellen, married Ian McNab in the same church almost 80 years later, in 1964. Norma’s parents grew up in Shieldfield, and various family members were baptized or married there including Norma and Ian’s two eldest sons who were baptised there.  The church is still standing.

Who was Bentley Henderson?

This photograph was taken by J. Cuttriss, Neville Street, Newcastle on Tyne and was found amongst my mother’s effects. I have not been able to verify that this is Mary Ellen’s husband Bentley, but I am pretty sure that it is.

In the 1881 census we find Mary Ellen’s future husband Bentley Henderson and his family in County Durham. He was born in Gateshead in December 1863 and in 1881 was living at 161 Harriet Street in Byker, Newcastle, Northumberland. The Henderson family comprised:

As we shall see later, a number of the same names were  used for  Mary Ellen’s and Bentley’s children.

By 1891 Mary Ellen was now Mrs Henderson and was to be found in the census for Newcastle, registered as living at 14, Stepney Bank, Byker, Newcastle On Tyne, Northumberland:

Mary Ellen and Bentley Henderson were registered in the 1901 census as residing at 93 Kirk Street, Byker, Newcastle on Tyne, with five children:

Interesting here is that two of the children, Dorothy and Louise, were registered as born in Widnes in 1894 and 1896 respectively. This is further evidence that the stories of Mrs Henderson’s visits to Faarnworth are true. Mary Ellen did keep in contact with her original family in Farnworth. Daughter Annie and son James would then have been in their early teens.

Bentley Henderson died on December 25th 1906 in Byker, just 42 years old, leaving Mary Ellen a widow with six children. He was buried in Byker and Heaton Cemetery on December 30th 1906. The location of Bentley’s grave in the cemetery has been found (photo below), with the generous help of Bev Bagnall of the Northumberland FHS,  but there is no gravestone. Mary Ellen was left a widow with six children and probably had more pressing needs than a gravestone.

Mary Ellen and Bentley with family lived in Byker, as did his parents. Byker was a Victorian working-class area of densely built terraces in the eastern part of the city of Newcastle, on the River Tyne. Much of the housing needed major repair and some was considered unfit for human habitation. Many houses had no bathrooms. It was redeveloped in the 1960’s. 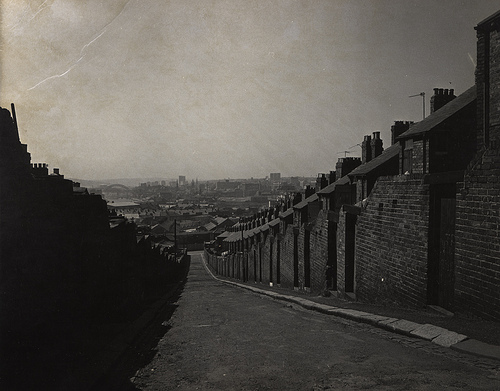 In 1870-72 Byker was described* as a township approx. one and a quarter miles East of Newcastle with over 10,000 inhabitants and just over a thousand houses. In other words, the houses were very overcrowded. “The inhabitants are employed variously in potteries, glass-works, quarries, collieries, and other manufactories and works.” There were two chapelries – Byker (1844) and Byker St Anthony (1868) in the parish of All Saints.

Three years later, in 1909, Mary Ellen and the children crossed the Pennines again, leaving Newcastle for Chadderton, Oldham, Lancashire. Why Mary Ellen took this step and why she chose Oldham is anyone’s guess, but she was probably looking for work in the Lancashire textile trade. Newcastle on Tyne was a shipbuilding and heavy industrial city. Another factor which probably influenced her decision was the death of father-in-law Elias Henderson in June 1909, age 76 yrs. On his death Elias Henderson lived in the parish of All Saints. Mary Ellen’s mother-in-law Hannah died earlier, in 1900, age 68 yrs. So there were no more family links with Newcastle to keep her there.

By 1909 she was alone with her eight children, from Annie Abbott aged 30 to Ida Henderson who was seven years old.