To the North of the River Mersey

Farnworth Village is located on high ground two miles north of the River Mersey, with the church occupying the highest point. The original name of the church was  St Wilfrid’s on the Hill. The land closer to the river was marshy and unsuitable for either farming or housing. From Farnworth Church and Farnworth Street it was possible to see the river – in fact there was an inn off Church Street called Sea View Inn, with Sea View Pleasure Gardens and bowling green. The road down to the river (Peel House Lane, a continuation of Farnworth Street) was about two miles long and quite steep. My family lived in Derby Road (formerly Puzzle Pate running East – West) near the crossing with Farnworth Street. My father cycled down to work by the river and back again every working day. He used to say “It’s a steep brew” when he arrived home, out of breath after a hard day’s work and pedal-pushing up the hill to Farnworth.

The village of Farnworth has existed at least as long as Farnworth Church, which was built in the year 1108, over 900 years ago. The name Farnworth is Anglo-Saxon and means the fern-farm from fearn (or brake – from the Scandinavian bräken) and weorthig meaning farm or estate. 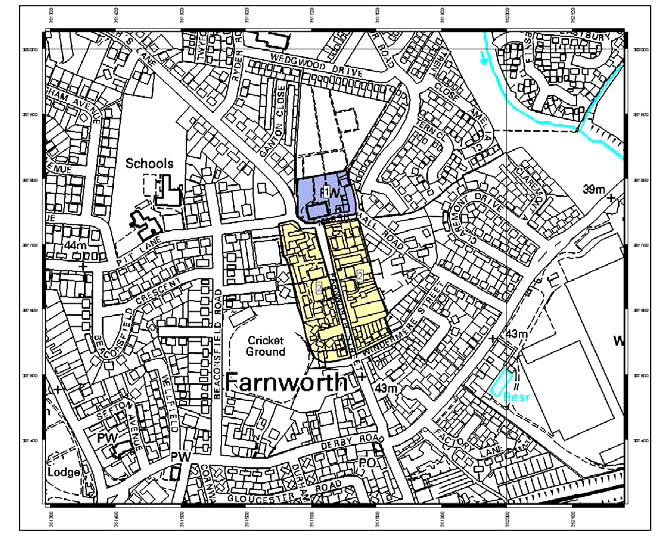 Inset of  Medieal Farnworth Village on modern-day map of Farnworth

The early history of the village is closely linked to the fortunes of the Bold family, the local nobility who dominated village and church life for 600 years from their seat at Bold Hall. The Bold family estates dated from before the Norman invasion and covered about six thousand acres of farmland. The estates employed many of the villagers as farm labourers but also as servants or craftsmen such as blacksmiths. Agriculture dominated Farnworth Village life for centuries and the catalogue shown below for the Farnworth Agricultural Society’s Annual Show in 1886 was the 22nd in order.

A comparison of Farnworth Village in the Middle-Ages and in 1875 when the first Ordnance Survey map was published (below), shows little change in the structure of the village. Farnworth Street has grown southwards to the Griffin Public House and is bisected by the east-west Puzzle Pate, now Derby Road. I grew up close to the crossroads, which by then had become the centre of the village.

One interesting building on the above map is the Castle View Hotel, referring to Halton Castle on the southern side of the Mersey, which clearly shows how high Farnworth Village was located in relation to the River Mersey and the town of Widnes.

The 1875 map shows several signs of early industrialisation in Farnworth. The Liverpool – Manchester railway line ran just south of the village in a deep cutting (bottom right on map). There were three or four canvas and sail-cloth factories based on local grown flax, to supply the sailing boats which plied their trade along the Mersey and out past Liverpool in the west to the Irish Sea. The largest sail-making factory (the New Mills Spinning and Canvas Works) was in Factory Lane off Puzzle Pate/Derby Road. There was also to be found the Farnworth Pith and Size Factory, which supplied the sail-makers with materials to stiffen and waterproof the canvas sails. Later the factory turned to glue and soap manufacture, but finally closed in 1956. It has since been demolished. Farnworth Street is seen below in 1905, looking north up to the church on the hill.

Read more about the Village of Farnworth in local historian Alan Foster’s fascinating and knowledgeable books “A History of Farnworth Church Its Village and Parish” (1981) and “A Walk Around Old Farnworth Village Past and Present”. Copies may be obtained from the Bridewell Museum and Widnes Historical Society. I am indebted to Alan Foster for the information and photographs presented here.